Most of us have woken on occasion with a numb hand. It can occur from sleeping on it. For some people it becomes more and more frequent until every night: sometimes several times a night or even during the day the hand goes numb, with pins and needles particularly on the thumb/ index finger side of the hand.

The condition is a common feature of pregnancy, and can occur in diabetics and those with low thyroid function as well as some forms of arthritis. Most commonly it happens by itself: with no medical condition.

This is the most common nerve compression syndrome.

I find it useful to think of this condition as occurring in 3 groups of severity:

In these cases, they have used their hands for an unusual, high intensity activity, which then causes CTS. For example: painting the house one weekend. I usually don’t see patients with this severity as this type often settles with treatment from the local doctor: splints to wear at night to avoid bending the wrists too much, and an injection of an anti-inflammatory steroid in to the carpal tunnel to reduce the reactive swelling.

In these people the symptoms have gradually developed, in the context of regular hand use, and show a progressive increase in frequency and severity of symptoms. A medical condition may co-exist.

Surgical release should be considered as the conservative treatments with splints and injections may help for a while, but commonly doesn’t and has a high rate of recurrence.

Numbness is present to some degree most of the time. Worsening of symptoms often still happens with exercise or sleeping. The function of the thumb, can be changed, with a small muscle wasting at the base affecting the thumbs ability for wide grip and wide pinch (opposition). Sometimes a tendon needs to be transferred to reconstruct that function if nerve regrowth seems unlikely.

This common condition is usually diagnosed by your doctor: a nerve conduction study is often helpful. Ultrasound can be unreliable in this diagnosis, but xray can reveal hidden arthritis of the thumb that may be involved. 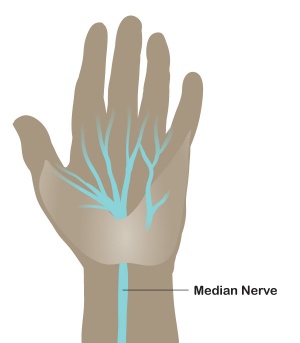 Carpal Tunnel Release is one of the most predictable surgeries undertaken. 96% of people can expect full relief of their symptoms almost the next day. A dense fibrous band does need to be released completely to free the median nerve, and that can be done with the endoscope assistance, or with an open surgical technique: the results are very nearly the same.

That fibrous band does stabilise the wrist for powerful grip and pinch: but will heal back to the normal strength within 12 weeks. You may notice some weakness and deep ache when placing the healing band under pressure: but that will resolve with time.

About 10% of people may need hand therapy help to recover: more if rapid return to work after this injury is needed: mainly to help scars soften and strength return as quickly as possible.

For all appointments
and enquiries call: